So where was I? I had met and greeted, I enameled… Ooh the leaf charm swap… must take pictures of my treasures… The Trunk show was fun, sold a few ceramic components. My thanks to all my fellow Art Bliss-ers who stoped by! But it was a late night, and I wanted to be ready to roll on Sunday morning… (pun intended)

Forest Floor locket: in theory we were rolling textures onto copper via the rolling mill, shaping them into puffed rounded forms with a hydraulic press and using cold connections to create a locket. 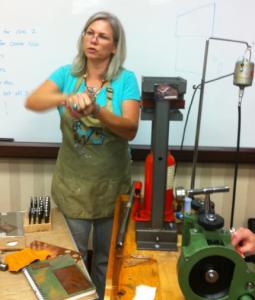 As usual Melissa was a treasure trove of ideas and inspiration. I fell in love with the rounded sculptural form of the metal after it was formed in the press. And since I don’t have nor do I foresee getting a press – I made extra pieces. Each piece I formed, sparked a new idea. Windows cut away to hint at treasures inside, reversed forms filled with resin… So I have a few in progress: 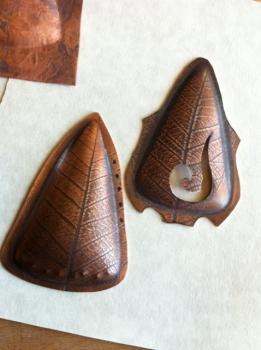 These two will have copper backs, and open in some fashion like lockets. I am thinking collage + resin inside…

These pieces are awaiting inspiration. It is just nice to look at them and ponder the possibilities, at times. Let me show you the details; I am in love with patinad (sp?) copper now!

The leaf detail if truly incredible!

So overall – Art Bliss was ….blissful. I know, you saw that one coming. But it was! Great location: the hotel had nothing nearby, so we were uninterrupted in our creative bubble all weekend. Food was brought in; coffee was brewed 24/7. It was just the focus on creating, networking, sharing…very much fun all around. I cant wait til next year!

My only complaint: The crash. I rode my personal wave of euphoria and inspiration and excitement home and into Monday. Tuesday was all about reality and chores, and time NOT spent in the studio. Geez – if thats the only negative…. I have pretties to look at, and take me back when I do get into the studio… And my new tiny steel letter stamps have arrived. Later!