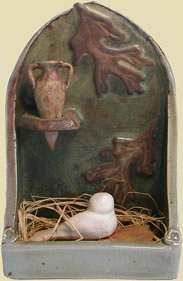 Discovering Greek mythology as a child, I longed to live in that era of goddesses and nature deities. Delving deeper into mythology, I uncovered inspiration in the Celtic myth cycles of my heritage, the Hindu pantheon, and the mythic tales of other cultures. I am drawn to the many intriguing commonalities among the belief systems of world cultures as they manifest in myths, tales, and rituals. Mythology is a symbolic language of icons and archetypes that resonate with the psyche. These archetypes and symbols can be read on many levels – both within the specific boundaries of a culture and, on a deeper level, as metaphor.

My shrines are built on a small scale to engage the viewer in an intimate experience. Familiar elements are afforded new status when enshrined, elevated to an item of reverence. Through their details, interior levels and enclosures, the shrines encourage continued interaction and discovery. Natural elements recall a time when myth, not science, explained the mystery of the world, a time when Nature was actively respected and revered as the primary life force. Juxtaposing objects within an architectural shrine, may reflect their intertwined symbolic meanings or evoke a sense of wonder, a sense of mystery.