Hello my Focus on Life photo/journey/challenge compatriots. I usually post on Instagram – altho I missed a few, and dont get to interact with you too much. I am usually teaching ceramics class every Saturday morning, and never seem to get a post written ahead of time… Please follow my pix on FB, and Instagram, and here – when I can.

(The scoop on Focus on Life can be found here for those of you that are curious.)

I spent last Sunday with a group of Stunners. Thats the Pre-Raphaelite term for their gorgeous ideal woman, their muse, that inhabit their paintings. I also spent time with real life beauties – my friends that accompanied me to the exhibit! It was a lovely day, hard to describe. The artwork touches a deep place in my heart and soul. It was wonderful to share the exhibit with like minded people. I ended the day feeling full, happy, sated, inspired, exhausted, euphoric….

Here are pix from that day – including my “Curve” themed shots. 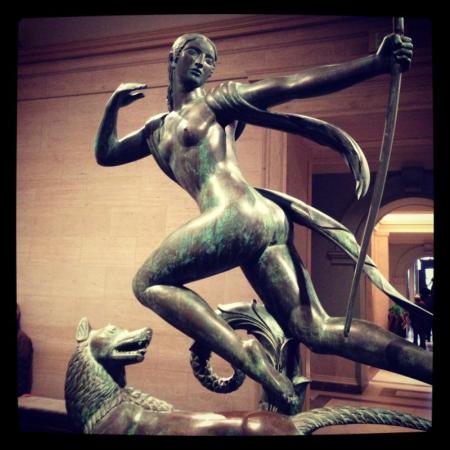 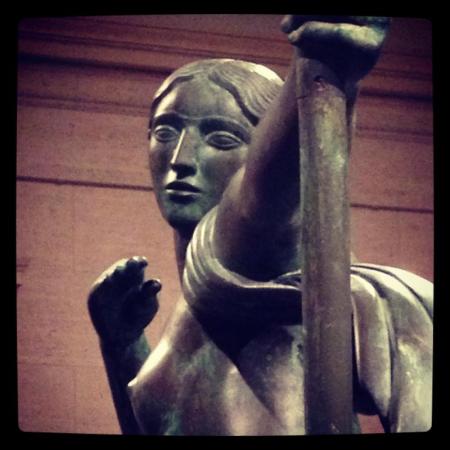 Sculptures are: “Atalanta” and “Diana the Huntress” by Paul Manship. Divinely Deco, fabulously female, marvelously mythic – my style! ( If the style looks familiar – have you seen the “Prometheus” in gold that dresides at Rockefeller Center? Yup. Same artist.) 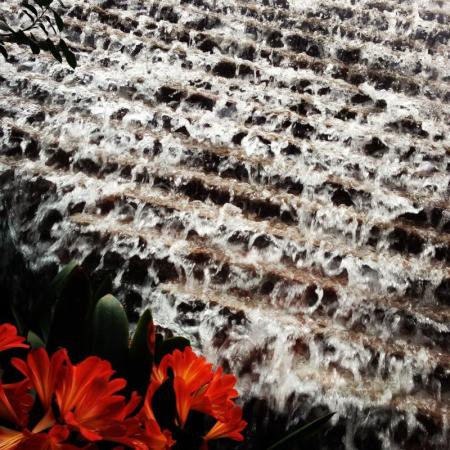 I think I take a picture like this every time I am at the National Gallery. It never ceases to enchant me.

I will admit – I have not posted pix the last 2 weeks. “Wrapped up” and “Possibilities” So I submit this catch up photo – for both! I am deep into preparing for my first show, and I am all wrapped up in clay. The posssibilities are endless!

Have a wonderful week everyone. I hope to see your pix out there on the Interwebs. Happy Spring!

If it was the fall of 1981 – then I was 13. We were visiting Boston as a family; my older sister was looking at colleges. We – as good tourists do – went to Harvard Square, and to the Harvard Co-op. This image was on the front of a bin of posters, dorm room decor at its finest. I was stopped dead in my tracks. No one noticed but me – my family walked inside the store… It was that feeling that time was slowed, and all sound and motion around you has ceased to affect you. I was enchanted. I had no idea who William Holman Hunt was, neither had I ever heard of “The Lady of Shalott”. My parents bought me the poster. It hang above my fireplace, the same print, to this day with pinholes from all the dorm walls it has faithfully adorned. I peppered my mother with questions in the car – to find that the Lady of Shalott was a poem by Tennyson. That was all she knew, but it was enough.  I have included the poem below – it still sends chills down my spine.

My love affair with the Pre-Raphaelites had begun. It was met with a wee bit of snide derision from a college art history professor – herself a Classicist/Rennaissance scholar. It influenced my painting studies as I strove to find my own way of expressing myth/narrative/folklore/history. Yesterday I saw this painting in person and I cried. I am not trying to be dramatic – I was moved to tears both by the painting and the long lived influence it has had on me from the formative years throughout my training and career as an artist. (The painting is owned by the Wadsworth Athaneum in Hartford CT. Not that far… but not that close… Their page on the painting is here.)

This painting as well as many other favorites of mine are on view at the National Gallery in Dc until mid May. Many are old friends I visited weekly after art history class, while studying in London. Some are old friends from the Delaware Art Museum, my local establishment; others were met for the first time. It is a glorious exhibit – if you are interested in the late Victorian, in poetry, myth, medievalism, Decorative arts, Arts and Crafts style…. please dont miss it.

On either side the river lie
Long fields of barley and of rye,
That clothe the wold and meet the sky;
And through the field the road runs by
To many-towered Camelot;
And up and down the people go,
Gazing where the lilies blow
Round an island there below,
The island of Shalott.1

Willows whiten, aspens quiver,
Little breezes dusk and shiver
Through the wave that runs for ever
By the island in the river
Flowing down to Camelot.
Four gray walls, and four gray towers,
Overlook a space of flowers,
And the silent isle imbowers
The Lady of Shalott.

By the margin, willow veiled
Slide the heavy barges trailed
By slow horses; and unhailed
The shallop flitteth silken-sailed
Skimming down to Camelot:
But who hath seen her wave her hand?
Or at the casement seen her stand?             25
Or is she known in all the land,
The Lady of Shalott?

Only reapers, reaping early
In among the bearded barley,
Hear a song that echoes cheerly
From the river winding clearly,
Down to towered Camelot:
And by the moon the reaper weary,
Piling sheaves in uplands airy,
Listening, whispers “‘Tis the fairy
Lady of Shalott.”

There she weaves by night and day
A magic web with colours gay.
She has heard a whisper say,
A curse is on her if she stay
To look down to Camelot.
She knows not what the curse may be,
And so she weaveth steadily,
And little other care hath she,
The Lady of Shalott.

And moving through a mirror clear
That hangs before her all the year,
Shadows of the world appear.
There she sees the highway near
Winding down to Camelot:  50
There the river eddy whirls,
And there the curly village-churls,
And the red cloaks of market girls,
Pass onward from Shalott.

Sometimes a troop of damsels glad,
An abbot on an ambling pad,
Sometimes a curly shepherd-lad,
Or long-haired page in crimson clad,
Goes by to towered Camelot;
And sometimes through the mirror blue
The knights come riding two and two:
She hath no loyal knight and true,
The Lady of Shalott.

But in her web she still delights
To weave the mirror’s magic sights,
For often through the silent nights
A funeral, with plumes and lights
And music, went to Camelot:
Or when the moon was overhead,
Came two young lovers lately wed;
“I am half sick of shadows,” said
The Lady of Shalott.

A bow-shot from her bower-eaves,
He rode between the barley-sheaves,
The sun came dazzling through the leaves,  75
And flamed upon the brazen greaves
Of bold Sir Lancelot.
A red-cross knight for ever kneeled
To a lady in his shield,
That sparkled on the yellow field,
Beside remote Shalott.

The gemmy bridle glittered free,
Like to some branch of stars we see
Hung in the golden Galaxy.
The bridle bells rang merrily
As he rode down to Camelot:
And from his blazoned baldric slung
A mighty silver bugle hung,
And as he rode his armour rung,
Beside remote Shalott.

All in the blue unclouded weather
Thick-jewelled shone the saddle-leather,
The helmet and the helmet-feather
Burned like one burning flame together,
As he rode down to Camelot.
As often through the purple night,
Below the starry clusters bright,
Some bearded meteor, trailing light,
Moves over still Shalott.

His broad clear brow in sunlight glow’d;   100
On burnished hooves his war-horse trode;
From underneath his helmet flowed
His coal-black curls as on he rode,
As he rode down to Camelot.
From the bank and from the river
He flashed into the crystal mirror,
“Tirra lira,” by the river
Sang Sir Lancelot.

She left the web, she left the loom,
She made three paces through the room,
She saw the water-lily bloom,
She saw the helmet and the plume,
She looked down to Camelot.
Out flew the web and floated wide;
The mirror cracked from side to side;
“The curse is come upon me,” cried
The Lady of Shalott.

In the stormy east-wind straining,
The pale yellow woods were waning,
The broad stream in his banks complaining,
Heavily the low sky raining
Over towered Camelot;
Down she came and found a boat
Beneath a willow left afloat,
And round about the prow she wrote  125
The Lady of Shalott.

And down the river’s dim expanse
Like some bold seer in a trance,
Seeing all his own mischance —
With a glassy countenance
Did she look to Camelot.
And at the closing of the day
She loosed the chain, and down she lay;
The broad stream bore her far away,
The Lady of Shalott.

Lying, robed in snowy white
That loosely flew to left and right —
The leaves upon her falling light —
Through the noises of the night
She floated down to Camelot:
And as the boat-head wound along
The willowy hills and fields among,
They heard her singing her last song,
The Lady of Shalott.

Heard a carol, mournful, holy,
Chanted loudly, chanted lowly,
Till her blood was frozen slowly,
And her eyes were darkened wholly,
Turned to towered Camelot.
For ere she reached upon the tide  150
The first house by the water-side,
Singing in her song she died,
The Lady of Shalott.

Under tower and balcony,
By garden-wall and gallery,
A gleaming shape she floated by,
Dead-pale between the houses high,
Silent into Camelot.
Out upon the wharfs they came,
Knight and burgher, lord and dame,
And round the prow they read her name,
The Lady of Shalott.

Who is this? and what is here?
And in the lighted palace near
Died the sound of royal cheer;
And they crossed themselves for fear,
All the knights at Camelot:
But Lancelot mused a little space;
He said, “She has a lovely face;
God in his mercy lend her grace,
The Lady of Shalott.”

Postscript: There are many glorious paintings of the PRB era inspired by this poem. John William Waterhouse painted numerous version himself, which I adore. If the poem speaks to you, don’t miss the song of the same name by Loreena McKennitt.